Artillerie belies its name as the two-seat artillery spotting version of the Bleriot with a larger 80hp Gnome engine. It was easy to disassemble for transport. Developed before the Great War, America’s 1st female pilot, Harriet Quimby died in a crash of her Bleriot XI-2 Artillerie in July 1912. Escadrille Number 3 (BL 3) which later became the famous “Escadrille des Cigognes” was formed in 1912 under Capitaine Georges Bellinger flying Bleriot XI-2s.

It was in British, French, Serbian, and Italian service and is a typical example of the early war artillery spotting aircraft of 1914 and early 1915 with a maximum speed of 59MPH and a ceiling of 2000 meters. Typical armament was either the rear seat observer was armed with bombs, flechettes or usually an 8mm Lebel calvary rifle. They were generally assigned to squadrons flying for artillery units. Another 2-seat was the 75mph Genie version for reconnaissance, one of which was displayed at the Salon de Paris equipped with a 30 round Hotchkiss machine gun. 19 August 1914 an XI-2 together with a BE-2a carried out the first RFC reconnaissance mission over the German lines. Used extensively by the French they were one of the aircraft that spotted the German movements that enabled French General Joffe to stop the Germans before Paris using Taxis and other vehicles to move the French army into superior defensive positions.

Our aircraft was built by Pierre Racette & Marcel Deschamp in Montreal partially using original blueprints from Musee De l’Air-Paris Museum. Built in 2015, its first flight was in 2016 using an English 110hp 7 cyl. Rotec R2800 engine. An identical throttle and other controls are in same location as in an original Bleriot XI-2, this also includes interchangeable replaceable parts throughout the aircraft. It uses wing warping like the real Bleriot’s making our aircraft a truly astonishing look-alike.

The word “escadrille” on the side of our XI-2 is French for squadron. It was never printed on the side of an aircraft as they used an insignia (stork, comet, etc) for squadron designations. Aircraft type was the first part of the French squadron designation, for example BL 3. Denotes Escadrille Number 3 flying Bleriots, Later when flying Nieuports it was designated NP 3 with the stork insignia on the fuselage.

The first RFC casualties were occurred when 3 Squadron was flying to France at the beginning of the war when an overloaded XI-2 crashed on takeoff into a group of trees killing Lt. Robin Skene and mechanic Keith Barlow.

On August 15, 1914, Sergeant Miodrag Tomic of the 1st Danube Division flying Bleriot XI-2 “Storm” encountered an enemy plane while conducting a reconnaissance flight over Misar in western Serbia. The Austro-Hungarian aviator initially waved at Tomic as they passed, then turned and began shooting at Tomic’s plane with a pistol. Tomic had his own pistol and fired back. This incident is considered the first recorded dogfight of the war. 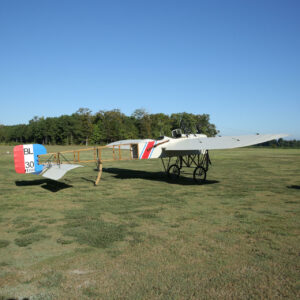