Unlike many other training aircraft of the era, the Jungmeister lacked a second seat for the instructor. The aircraft filled the role of advanced trainer for the Luftwaffe. With a high power-to-weight ratio and ailerons on upper and lower wings, it was also an excellent aerobatic aircraft

The Bü 133 was a development of the Bücker Bü 131 Jungmann two-seat basic trainer. This airplane, which was used alongside others like the Fw 44, featured an inverted inline engine. Some early models of the Jungmeister used a likewise inverted inline engine, but the main production type made use of the 160 hp Siemens-Bramo Sh 14A radial engine.

The Museum’s Jungmeister was built in Switzerland by Dornier Flugzeugwerke in 1940 for the Swiss Air Force. Its markings are a tribute to Lehrgeschwader 1, a German, WWII-era training unit. In keeping with the aircraft’s well known aerobatic tradition it was flown in June 2007 by Patty Wagstaff, the first woman to win the US National Aerobatic Championships.

The Jungmeister design was so well suited to Aerobatics that it remained active in international competitions into the 1960s. 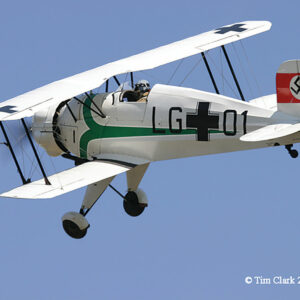