Known to many as the Bamboo Bomber owing to its wooden construction, the Bobcat was vital in training multi-engine aircraft pilots during the war.

Developed originally for the pre-war civilian market, the T-50 family of aircraft would spawn one of the war’s most important multi-engine trainers. The initial Army order for 33 of the airplanes was the first order for purpose-built, multi-engine trainers for the US Army’s expanding air forces. This initial order would grow to more than 3,500 aircraft for the Army. The Museum’s aircraft, serial number 43-31765 was built in Wichita, Kansas in January 1944 and carried the Cessna construction number 5703. It was ferried to its station at Camp Stewart in Georgia through Dallas (Love Field) and Atlanta.

Near the conclusion of the war, 43-317675 was transferred to Fort Dix, NJ and the 116th AAF Base Unit at McGuire for disposal. The Reconstruction Finance Corporation (RFC) and the War Assets Administration logged the aircraft in on April 14, 1945 and sold it on July 5, 1945.

Bamboo Bombers would be sold off for between $1,500 and $3,000 after the war, depending on the engine time and airframe condition. So many were sold that a kit was available to convert the airplanes back into a civilian T-50. 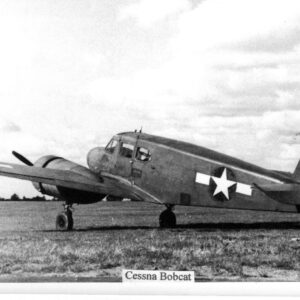