Flying the “Hudson Flier”, a Type I machine, Ely took off from a temporary platform erected over the bow of the light cruiser USS Birmingham on 14 Nov 1910, landing at Willoughby Spit, Norfolk. Later, on 18 Jan 1911, Ely landed a Curtiss Pusher D, Type IV Military, on a temporary platform erected on the stern of the armored cruiser USS Pennsylvania anchored in San Francisco Bay.

Model Ds were designated by type and/or name and were characterized by 51.2 hp water-cooled V8 pusher engine with a 7’ propeller (45-70mph), single rectangular tail rudder, ailerons mounted on the aft interplane struts, equidistant between the upper and lower wings. The pilot sat forward of the leading edge with his seat level with the lower wing. The Military Model D’s incorporated modular, “knock-down” wing panels to meet an Army Signal Corps requirement for rapid assembly/disassembly to facilitate truck transport.

Ely died October 19, 1911, at an exhibition in Macon, GA when his aircraft was late in pulling out of a dive. He was posthumously awarded the Distinguished Flying Cross by Congress February 16, 1933 for his extraordinary achievements as a pioneer civilian aviator and for his significant contribution to naval aviation development.

MAM’s replica is designated as “Type IV Military Model D.” N44VY, was built by Commander Bob Coolbaugh (USN, Ret.) to mark 100 years of naval aviation. It is powered by a Continental 6-cylinder air cooled horizontally opposed engine. It first flew 8 October 2010, and then was flown and exhibited at 19 events in 2011, including 15 events to celebrate the “Centennial of Naval Aviation.” It arrived at MAM in 2012. 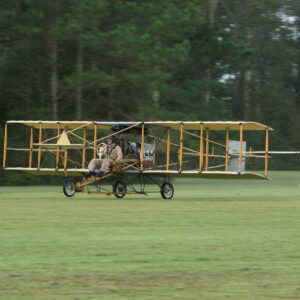 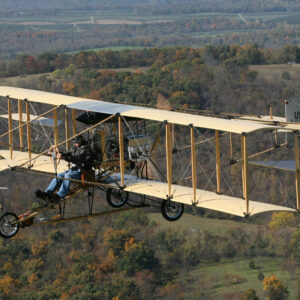