The Tiger Moth was the main primary trainer used in Britain in the lead-up to WWII. It would provide many pilots their first taste of solo flight and send them on a path of preparation for combat flying.

The Tiger Moth was originally designed to appeal to a civilian market interested in touring and flying club activities, and the design would move through a range of iterations before settling into the shape we see today. The upper wing was moved forward, the exhaust system revised, and small doors added to the fuselage to make it easier for trainee pilots to escape a stricken aircraft while wearing a parachute. The wings were swept to maintain the center of lift when the upper wing was moved forward.

By the time war broke out there were around 1,400 Tiger Moths in service with military and civilian operators across the British Commonwealth. Most of the airplanes in civilian hands were impressed, forming the backbone of the Commonwealth Air Training Plan. Airframes in the United Kingdom were prepared for the worst, with several being converted for use in maritime patrol and as light bombers should the British Isles be invaded.

Constructed in 1940, our aircraft was one of more than 3,400 built at Morris Motors Limited in Oxford during the war, and was shipped to the Royal Australian Air Force Training command, where it would see service for 12 years, continuing to operate well after the end of WWII.

British Commonwealth Air Training Plan: Often simply known as “The Plan” was a massive joint military aircrew training program created by the United Kingdom, Canada, Australia and New Zealand during WWII. The program allowed for the training of one another’s pilots out of range of enemy attack, a specific concern for the British in the early days of the war. The trainees would receive early instruction in various commonwealth countries and would travel to Canada for their advanced training before being deployed. Canada was chosen for this role because of its proximity to both primary theaters of the war.

The Tiger Moth’s engine is upside down! It features at Gipsy Major inverted 4-cylinder engine which can generate up to 130hp. 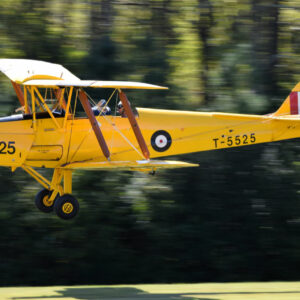 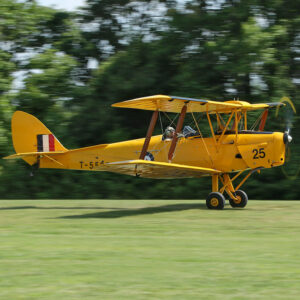 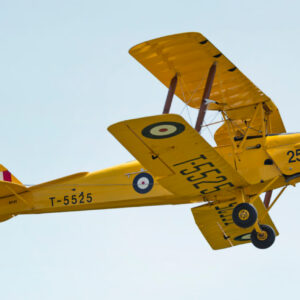