Famed for its incredible Short Take-Off and Landing (STOL) performance, the Storch was deployed in all European and North African theaters of the War from the first day to almost the very last.

Storch’s would be used to land German troops behind Belgian lines early in the war. And, curiously the last air-to-air victory recorded over Germany occurred when, on April 11, 1945, Merritt Duane Francies and William Martin opened fire on a Storch with their Colt .45s from the side windows of their L-4 Grasshopper.

With a stall speed of 31mph, it is said that the Storch could hover in a strong headwind. The airplane was designed to do one thing exceptionally well, operate from confined spaces close to the frontlines. With a fixed slat running the entire length of its wings and hinged, slotted, control surfaces, the airplane was all about generating lift at the expense of speed.

The nickname Storch (Stork) came from another feature designed to support operations close to the frontlines; gear legs with more than 15 inches of travel. These legs and their shock absorption system meant that the airplane could handle rough ground but caused the gear legs to dangle beneath the airplane in flight, like the legs of a stork.

The Storch design was so successful that it continued to be manufactured after the war. The Museum’s example was produced by Morane-Saulnier in France in 1949 but has been fitted with an original German Argus As 10 Inverted V-8 engine.

The Gran Sasso Raid: Our aircraft wears the markings of one that was involved in the German rescue of Italian fascist dictator Benito Mussolini. The Allies had taken Mussolini prisoner and were keeping him high in the Apennine mountains at the Hotel Campo Imperatore on the Gran Sasso d’Italia.

The mission which had been personally ordered by Adolf Hitler involved the use of SS soldiers and Glider-borne Fallschirmjӓger to seize control of the hotel and free Mussolini. Once free, the limited space in which to land an aircraft on the mountain called for the use of an early helicopter, however, after it broke down a Storch was sent. The aircraft, SJ + LL landed in just 100 ft, loaded Mussolini and others, and then took off in just 250 feet despite being overloaded.

The Storch has folding wings, unusual for a land-based airplane. This feature made the Storch easier to transport either by train, in trailers or on roadways towed behind a truck. 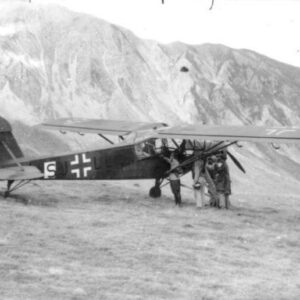 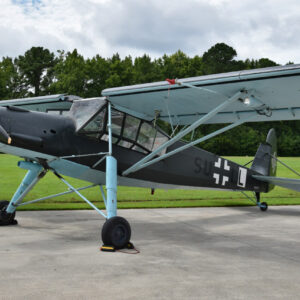 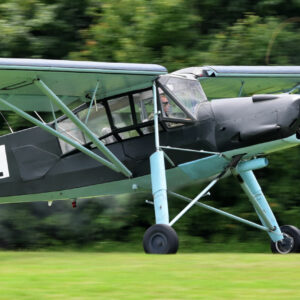 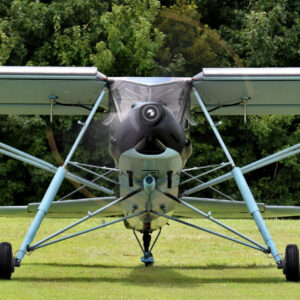 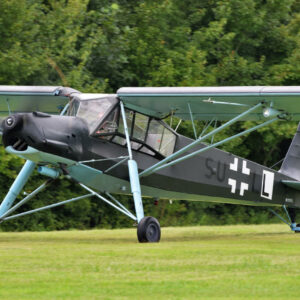