The Fw 44 would become so popular with pre-war flying clubs and see such extensive use with the Luftwaffe as a training platform, that it is said that every German pilot of the WWII-era flew an Fw 44 at some point in their career.

The Fw 44 features a fabric covered, steel-tube fuselage with wooden wings, and is powered by a 140 hp Siemens Sh 14 Radial engine. The aircraft were highly maneuverable and would win many aerobatic competitions before WWII in the hands of skilled pilots. It was an Fw 44 being flown by Count Otto von Hagenburg that won the International Aerobatic Competition in Berlin in 1936. Although it was held at the same time as the Olympics, this competition was not part of the Olympic Games.

The Museum’s Fw 44 is an original German built aircraft, WkNr 183 built by Focke-Wulf at Bremen, Germany in 1937. The aircraft wears markings typical to WWII-era Luftwaffe trainers, though it was actually shipped to Argentina before WWII. 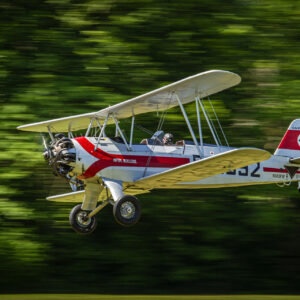