139 E.V.s (E: monoplane, V:5th from Fokker) were built and sent to squadrons in August 1918. It married an innovative airframe with an obsolete dead- end rotary engine. Only two fighter Squadrons JASTA 6 & 19, received a full complement of twelve. The E.V. was in combat from 5-19 August 1918 but was grounded after three aircraft lost their wings killing the pilots. Investigations found a combination of inner wing rot due to wet weather and substandard subcontractor work were the causes.

The old wings were destroyed and replaced with new ones. Delivered by the end of the war, the aircraft was renamed the D.VIII (D8). They never returned to WW1 combat units but continued to be built postwar until the end of December 1918 for a total of 289 aircraft. Fifteen Fokker E.Vs and one Fokker D.VIII flew with the Polish Airforce until January 1921.

There is only one recorded victory on August 17, 1918, but aviation historians believe there were two or three more victories. Postwar they served in the Polish Airforce and as trainers or “war booty” in the US, Holland, and USSR. D.VIII P-165 at McCook Testing Field (Ohio) lasted until 1927, making it the last rotary engine aircraft in Army inventory.

Our Fokker E.V. 160/18 is in the yellow, black, and green livery of 31 victory German naval ace Lt. Gottard Sachsenberg. He was the commander of Marine Feld Jaggruppe 1 (Naval Fighter Group) in Belgium defending German naval and land units in August 1918. He scored all his victories flying the Fokker D.VII (D7). He was the builder of our Cottbus Hangar after the war.

Leutant Emil Rolff scored the first kill in an E.V. on August 17, 1918, but two days later he was killed when his aircraft wing separated from the fuselage.

Lieutenant (por.pil ) Stefan Stec earned the first victory for the Polish Airforce, by shooting down a Ukrainian Nieuport 23 fighter on April 29, 1919. Later it was found to be badly shot up but had managed to land near its airbase.

Myth Busters: They were never known as “The Razor,” nor did they score the last German victory of the First World War or were they designed by Reinholt Platz. 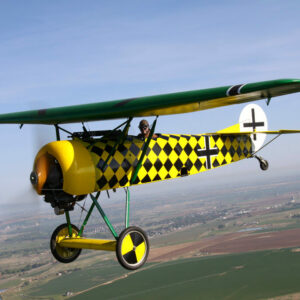 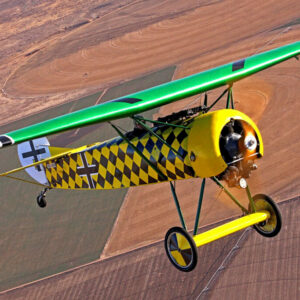 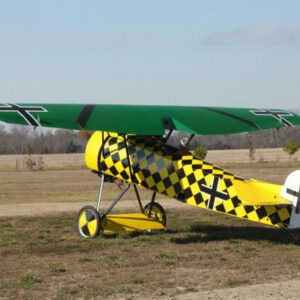 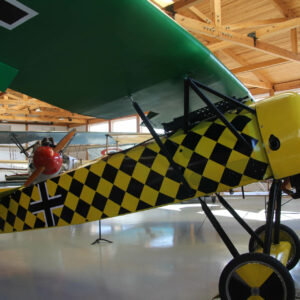