The Fokker utilized available German manufacturing and rotary technology developed for the Dr.I triplane for this faster experimental biplane, the prototype V13/I. Developed at the same time as the D.VII (V18), the wings looked like a scaled down D.VII wing but were designed and proportioned for the type with the fuselage and empennage like the Dr.I. It used a Dr.I’s Oberrursal Ur II or 145hp (123mph) Ur III rotary engine. It was part of a design direction that the design team at Fokker was engaging in at that time on numerous prototypes

The lack of third wing drag and mounting 2x 7.92mm Spandau machine guns, it was maneuverable and fast at low altitude. The Oberrursal UR II was preferred by service pilots and initially specified, with the intention of later orders using more powerful rotary engines as they became available. Of the 80 ordered, only 59 were built equipping German JASTA 80b and an Austro-Hungarian squadron with the Ur. IIs. They were designated the Fokker D.VI. The excess Ur II & III engines were transferred to the Fokker E.V./D.VIII construction. It was not developed due to scarcity of rotary engines, lack of lubricating castor oil and lack of rotary performance at high altitude. It was relegated to training by September 1918.

MAM’s Fokker D.VI was built in 1996 by Walter Redfern. The museum acquired this plane in 2012 from Heritage Aircraft in Pennsylvania and it had its first flight September 15, 2016. Presently, this D.VIs camouflage scheme has not been authentically identified and is under further research as they were all produced in Lozenge camouflage.

Fokker built two aircraft for the fighter competition one for the high-altitude class (V18), and the other for the low altitude class (V13/I). The V18 was the overall competition winner and became the famous D.VII. The V13/I was a back-up. Fokker experimental preproduction aircraft were labeled with “V.” and a number before they were accepted and given an official designation, “D.VI.”

1918 Germany essentially had no caster oil due to Allied blockade and used a poor ersatz lubricant Voltol. The use of Voltol grounded 30 Fokker E.V./D.8s withing their first two weeks of combat in August 1918. 1918 air combat was typically initiated at high altitude which also limited the E.V. and other rotary engine aircraft.

Squadron JASTA 80b was a Bavarian squadron and it was equipped with 7 D.VIs for their transition to the Rotary Powered Pfalz D.VIII with the Sh III 160hp-220hp engine.
More importantly, the problem was that Germany did not have enough rotary engines and they did not function well at high altitude like the Mercedes/BMW 6-cylinder engines in the D7. Sutherland, Gary, “Designing at Albatros,” Over the Front, Vol31, Number 4,Winter 2016 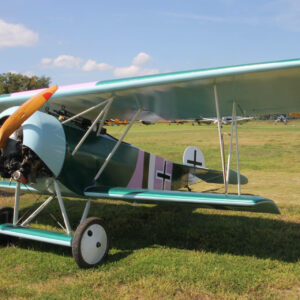 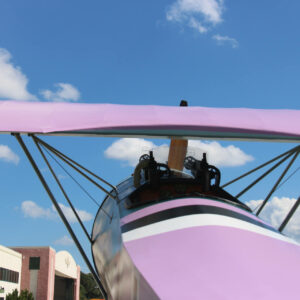