Originally designed as a Torpedo Bomber, the Avenger would move past an inauspicious debut at the Battle of Midway to become the most effective and widely used Torpedo Bomber of the war. They would also see service as carrier-based conventional bombers and anti-submarine warfare aircraft.

The Avenger would have its combat debut at the Battle of Midway. Designed as a replacement for the obsolete TBD Devastator, the Avengers were just entering service in the days before the battle. VT-8, assigned to the USS Hornet, was the first unit to receive the new aircraft. Although the ship had set sail for the Pacific, half of VT-8 remained at Norfolk, VA to receive the first shipment of new aircraft. The group, in their brand new Avengers (each fitted with a 270-gallon ferry tank), sought to rejoin the Hornet at Pearl Harbor, and flew 20 hours west from Norfolk only to find that the carrier had already departed for Midway. The Squadron then flew on to Midway, where the island was attacked before they could re-connect with the Hornet’s air group.

Launching from the Island, the group from VT-8 in their Avenger aircraft would be the first Navy aircraft to attack the Japanese fleet that day. Five of the six aircraft were shot down, with only Ensign Albert K. Earnest and Radioman 2nd Class Harry Ferrier surviving, in a badly shot-up plane with damaged controls and landing gear, and a dead rear-gunner.

Intended to replace the TBD Devastator, the Avenger was a larger aircraft with space to carry torpedoes internally in a bomb bay. Although designed by Grumman and classified as the TBF, production demands of wartime meant that 7,546 of the 9,837 produced were built by General Motors. The Museum’s TBM (BuNo 53454) was built at the Eastern Aircraft Division Plant in Trenton, New Jersey. Delivered to the Navy on May 26, 1945, the Museum’s Avenger did not see combat service during WWII.

Captain Richard “Zeke” Cormier: The Museum’s Avenger wears a paint scheme that pays tribute to US Navy Ace Captain Richard “Zeke” Cormier. Cormier had 75 combat missions in the Atlantic flying Avengers while hunting German U-Boats before he transferred to the Pacific where he would become an ace flying 61 missions in the Grumman F6F Hellcat. The aircraft’s markings are that of Composite Squadron 1 (VC-1) that operated from the USS Card (CVE-11). Composite Squadrons were made up of different aircraft types, often a mixture of Wildcats and Avengers operating as anti-submarine, Hunter-Killer groups in the Atlantic.

Following the war, Cormier would go on to serve in Korea, then as a flight leader in the Blue Angels and as Executive Officer of USS Wasp, before playing a key role in the establishment of the San Diego Air and Space Museum.

Grumman patented the design of its wing-fold mechanism, called the Sto-Wing on the Wildcat, and then used the same mechanism on the Avenger, but powered it with hydraulics. 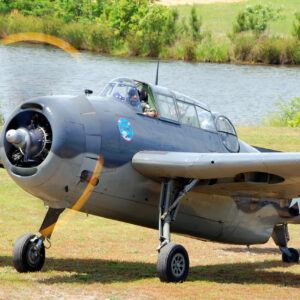 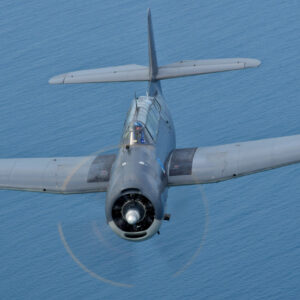 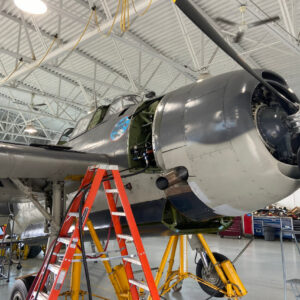 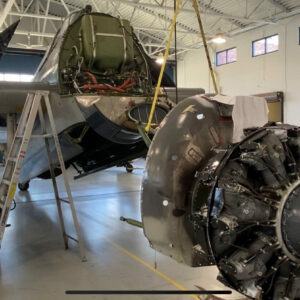 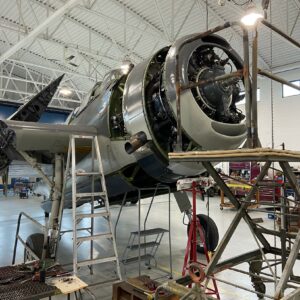 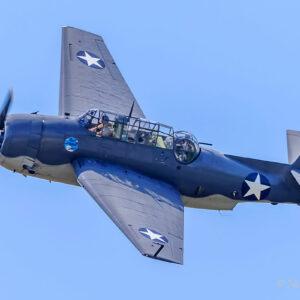 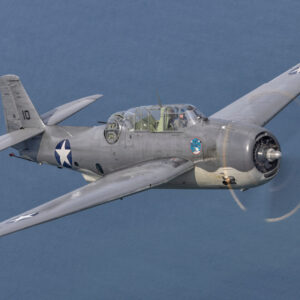