The Halberstadt CL.IV was an exceptional two-seat fighter used mainly as an infantry air/ground support aircraft providing direct low-level support of mobile German storm troops (Strumtruppen) during the last months of the World War I. It was the mission forerunner of future air/ground support aircraft such as the Ju 87 Stuka used in WWII and the current USAF A-10 Warthog.

Powered by a 170hp Mercedes D.IIIa 6-cylinder engine, the aircraft was armed with one or two- forward firing 7.92m Spandau MGs with another ring mounted fast firing 7.92mm parabellum 14 MG 14 for the observer. Low level attacks with grenades, light bombs and the Parabellum firing into the trenches were devastating to Allied troops.

It was one of the most effective ground attack aircraft of World War I, relying on its good  maneuverability to avoid ground fire as well as out-maneuver and out-gun opposing single-seat fighters at low level. Unique for its time, the pilot and observer/gunner shared the same cockpit, separated only by a wood panel, which greatly simplified verbal coordination between the crew.

Our artifact, N6175J, it is a full-size replica built by John Eberle in 1993.  It arrived at MAM  in 2006. The paint scheme is semi-traditional, in terms of colors, but the cartoon depiction is fictional. In addition, its radiators are mounted on the sides of the fuselage to hide a modern air cooled powerplant. Operational CL.IVs had radiators (and fuel tanks) mounted within the top wing.

America’s top ace Eddie Rickenbacker stated that the Halberstadt CL IV was the hardest aircraft to shoot down because it maneuvered like a fighter, with a rear Parabellum 14 MG.

Flights of four to six aircraft flew close support missions, at an altitude of less than one hundred feet, flew in a line abreast or two Vs (or “vics”) of three aircraft to suppress enemy infantry and artillery fire just ahead of the advancing German troops. 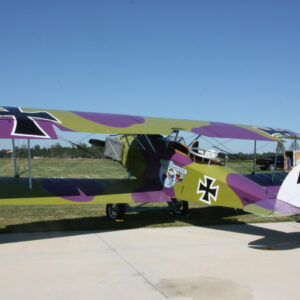 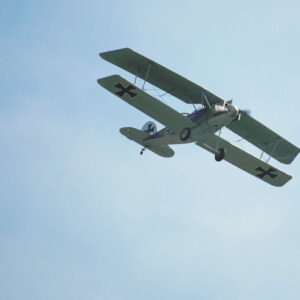 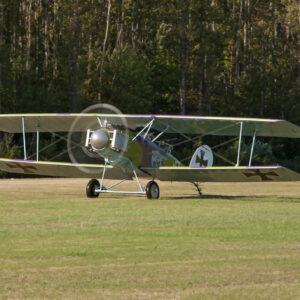