Gliders were used widely during the war to transport airborne troops and cargo. Gliders like the TG-4A provided training platforms for the combat glider pilots of the US Army Air Forces.

TG-4A was a conventional sailplane design with a fuselage of steel tube construction and spruce and mahogany plywood cantilever wings and tail, skinned all over with fabric. The pilot and instructor sat in tandem under a long canopy. Interestingly, the gliders were equipped with SCR-585 radios to allow the glider to communicate with the tow plane.

The Museum’s TG-4A (42-53072) was ordered in 1942 and manufactured in St Louis, Missouri. It was one of 150 that were built to be used for training during WWII. Production of the type ceased in June 1943. It was restored by Windsor, VA glider enthusiast and WWII CG-4A veteran Joe Mathias, Jr. who flew it into the Museum to join the collection.

Glider pilot wings are emblazoned with the letter G, which they said, stood for guts. 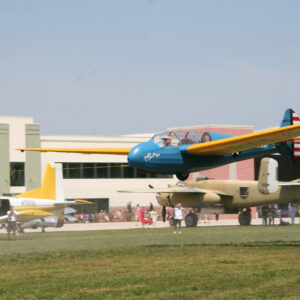