Designed to tackle the Luftwaffe and its bombers at high-altitude, the nature of combat on the Eastern Front often meant that the MiG-3 had to operate outside of its design parameters.

The Museum’s MiG-3 (serial number 3457) is the only example found in North America and one of just a handful that can be seen intact anywhere in the world. Like the Museum’s Yak-3M the MiG-3 is powered by an American engine, the 1,400-hp Allison V-1710, which is similar in design to its original Mikulin AM35-A engine. The aircraft was restored by Aviarestoration in Russia and wears the same markings (as White 17) as it had when it was crash-landed in September 1941 by Col. M.M. Golovnya.

During the restoration of 3457, parts from as many as six MiG-3 wreck sites were used. These wrecks were found and recovered throughout the Murmansk and Loukhi regions of Russia. Due to wartime shortages of aluminum alloys widely used for the construction of aircraft in other nations, much of the MiG-3 actually makes use of wooden compounds, wood being much more available to the Soviet Union.

Being called upon to operate outside of the role for which it was designed meant that the MiG-3 suffered the highest losses, as a percentage of total air frames built, of any fighters in the Voyenno-Vozdushnyye Sily (VVS), the Soviet Air Force. Out of a total of just 3,422 that were built, 1,432 aircraft were shot down.

Some MiG-3s were fitted with the AM-38 engine and it had a noticeable effect on their performance at low altitude, but this experiment was cut short as the AM-38 engines were needed for the Il-2 Sturmovik, considered vital to the Soviet war effort. 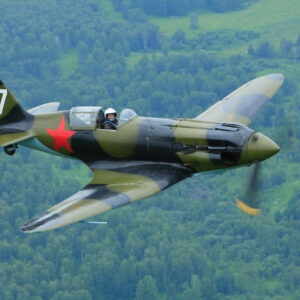