Arguably the most iconic American fighter of WWII, the Mustang is a testament to American ingenuity and industrial capability. The Mustang was designed in 1940, with the first flying prototype built in just 120 days.

The Mustang was originally designed to British specifications and was powered with the American-built Allison V-1710 engine. The Allison however, struggled at higher altitudes, which invited the British to engage in an experiment, where they swapped the engine on a Mustang (a nickname they had created) for their more powerful Rolls-Royce Merlin engine. This combination would be a game changer, with a top speed of over 400 mph and vastly improved high-altitude performance. Coupled with the new K-14 gunsight and improved armament of six .50 caliber Browning machine guns, the Mustang’s impact on the air war over Europe cannot be understated.

Before the Mustang model came into service, the bomber units of the 8th Air Force took 77% casualties from 1942 through 1944. The P-51 completely reversed that trend and mission requirements for bomber crews actually went up as the Mustangs went to work eliminating the Luftwaffe from the skies over Europe. Their work defending the bomber formations earned the escorts the nickname “Little Friends.”

A testament to the success of the type is just how many Mustangs were ordered and built during WWII. The Museum’s P-51D is one of more than 15,500 Mustangs built. Our aircraft, serial number 44-72483, was built in 1945 and was immediately sent to England where it was assigned to the Eighth Air Force. It was bought by the Military Aviation Museum in 2004 from an owner in Switzerland.

Lieutenant Colonel William “Wild Bill” Bailey: Our aircraft is painted in the group markings of the 353rd Fighter Group with the black and yellow checkers, and a black and yellow propeller spinner. Known as the Slybirds, the group consisted of 350th, 351st, and 352nd Fighter Squadrons.

The aircraft specific markings are those of Lieutenant Colonel “Wild Bill” Bailey, Deputy Group Commander, and includes his six aerial victory markings. He called his original aircraft “Double-Trouble” because he left two girlfriends at home in the United States, and the name became “Double-Trouble Two” when his first Mustang crashed while being flown by a squadron-mate.

A graduate of the Civilian Pilot Training Program, Bailey had chosen Army Flight Training in 1940, instead of Harvard Business school. In his two combat tours Bill Bailey flew 186 combat missions totaling 454 hours. He flew 32 missions and 129 hours in the P-51. He was credited with 3 enemy aircraft destroyed in aerial combat and an additional 3 destroyed on the ground.

Reichsmarschall Hermann Göring, commander of the German Luftwaffe during the war, was quoted as saying, “When I saw Mustangs over Berlin, I knew the jig was up.” 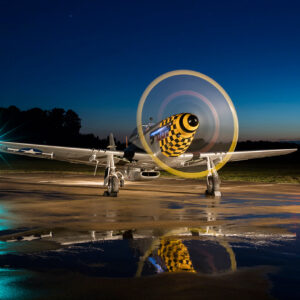 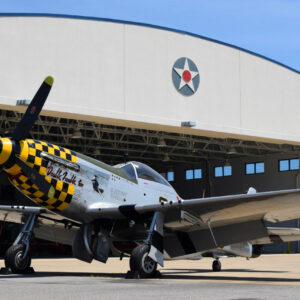 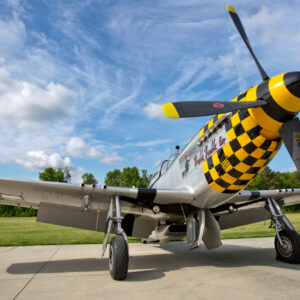 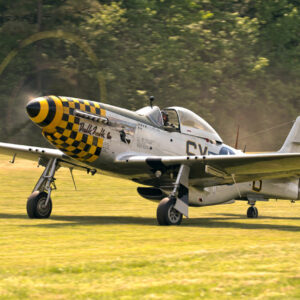 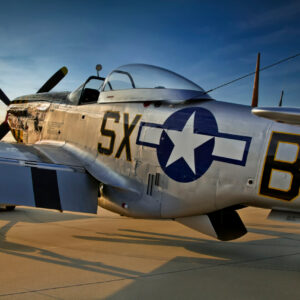 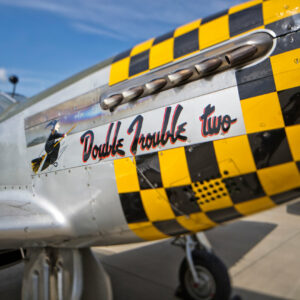 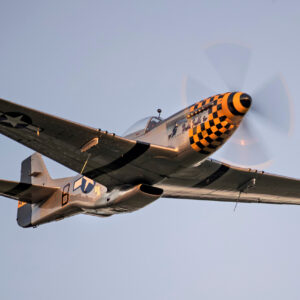 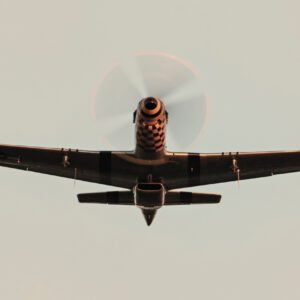 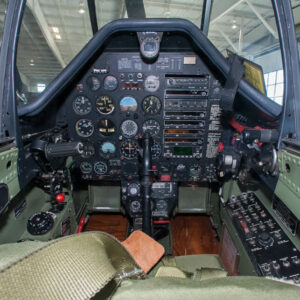 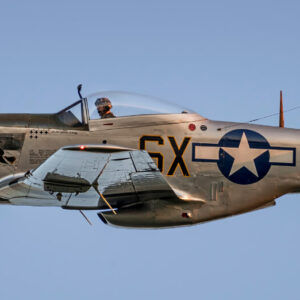 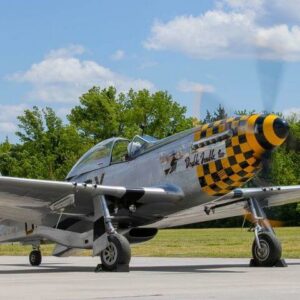 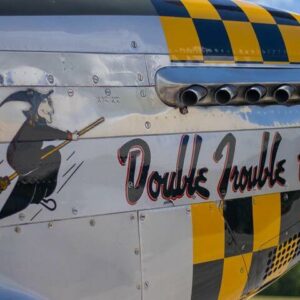 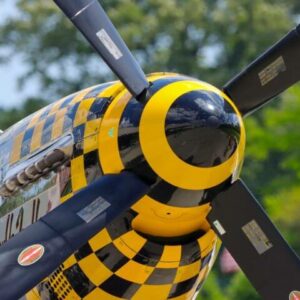