Originally intended as a trainer and sport plane for the civilian market, the Cub placed aviation within reach of thousands through the Civilian Pilot Training Program. With relatively few modifications, the cub was militarized as the L-4 in Army service, and the NE-1 in Navy service.

The Museum’s Cub is a civilian built Piper J-3, and early in its career it is thought to have supported Civilian Pilot Training Program efforts.  The program was set up in the years before the war and allowed around 20,000 college students per year to receive 35 – 50 hours of instruction. Many of these students who already had flight familiarization training would become the core of US military training efforts when the war broke out.

It would be the inclusion of Tuskegee University, Hampton University and Virginia State University, along with others in this program that would see the first doors opened to African American pilots, serving as the foundation for the military training programs that would later emerge.

Cubs would also be among the civilian aircraft that would make up the backbone of the Civil Air Patrol, flying short-range patrol missions off the US coast to help spot submarines or sailors in distress.

Glimpy: In 1944 tests were conducted at Naval Air Station Lakehurst to allow light aircraft to be launched from the Navy’s patrol blimps. The Cubs were modified to allow them to hook onto an apparatus underneath the blimp. The Cub would be dropped when reconnaissance photographs or other important material needed to get back to base while allowing the blimp to continue its mission. Unlike other similar airship – airplane combination efforts, there was no way for the Cub to re-attach itself to the blimp after being launched. Both aircraft would have to be returned to base to be rejoined.

Some L-4s (the US Army version of the Cub) were armed with bazookas under the wings to attack German tanks! 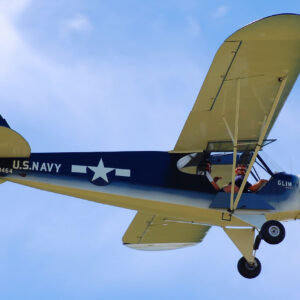 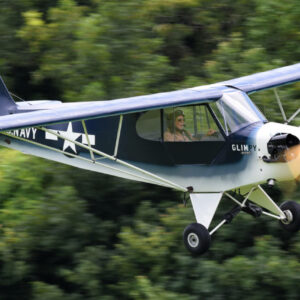 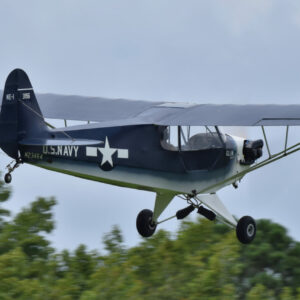 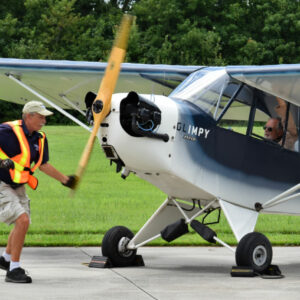