The Sopwith Triplane is a three-wing single seat scout (fighter) mounting a Vickers .303 caliber machine gun that fired through the propeller. It was privately developed by Sopwith and flew exclusively with the Royal Navy from December 1916 through the end of 1917 when they were replaced by Sopwith Camels. Pilots nicknamed the Sopwith Triplane the “Tripehound”, “Trihound”, “Triplehound”, or simply the “Tripe”. Sopwith chose the triplane configuration to provide excellent pilot visibility, rate of climb and maneuverability.

Only around 160 were built. The powerful 130-hp Clerget 9B rotary engine (117mph Max) gives it a tremendous 1,000ft/min rate of climb, high-altitude performance, and exceptional maneuverability; out-performing German scouts except for level flight and diving speeds. Unfortunately, this was also offset by its single gun and difficulty to repair.

It was made famous from May to July 1917 by the 10 Naval Squadron all Canadian “B” “Black Flight.” Their aircrafts’ cowlings, metal fuselage panels just behind the cowlings, and canvas wheel covers were painted black. They accounted for no fewer than eighty-seven enemy aerial victories.

Flying the heavier, but two-gunned Albatros, German ace Baron Manfred von Richthofen, the “Red Baron” was so impressed by its flying qualities that he campaigned for the German Air Service to build one.  This eventually resulted in Fokker’s rotary powered triplane, the iconic Fokker Dr.I.

MAM’s Sopwith Triplane is a full-scale replica that was built by Charles D. Wille in 1993 and acquired in 2017. In place of a rotary engine, it has a Lycoming O-435 opposed six-cylinder engine mounted  behind an 8-cylinder dummy rotary engine and false firewall. It is in the livery of the period, but the name on the cockpit is that of its builder. It does not have the horizontal tailplane incidence adjustment  feature and actuating wheel of the original as well as the tail skid replaced by a modern steerable tail wheel.

Our Sopwith Triplane was recognized as the “Outstanding Aircraft” at SUN n’ FUN 1993  airshow.

British squadrons were divided into 3 flights of 6-8 aircraft, each marked differently for recognition in the era before radios. Leaders usually flew a pennant from one of their wing struts. As a scout, it actively hunted and engaged German observation and scout aircraft (Offensive Patrols). It also  served to escort aircraft on bombing missions. 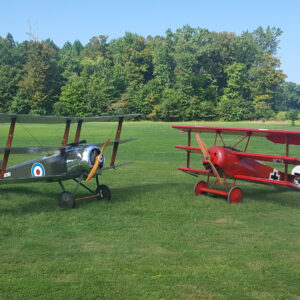 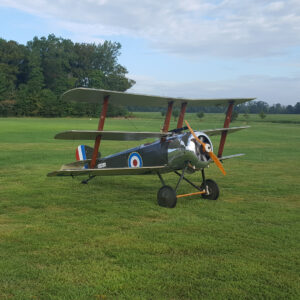