Early Albatros fighters (D.I-D.III) were the first fighters powered by 160-hp Mercedes in-line engines which gave them the power to carry two 7.92mm synchronized machine guns. These proved superior to all other Western Front one-gun fighters from autumn 1916 until May/June 1917.

Albatros fighters were sent first to specialized squadrons of one-seat scout fighters that were established to achieve local battlefield air superiority. These units (Jagstaffelin, or Jasta) used aggressive unit tactics (the “Dicta Boelcke”) that enabled Germany to achieve air superiority in 1917.  The later the D.V and 180hp D.Va also were the dominant German fighters from August 1917 until July-August 1918.

Early Albatros fighters (D.I-D.III) were some of the key aircraft flown by the Germans during so-called “Bloody  April” of 1917, also known as the “Second Fokker Scourge.” During this period the Royal Flying Corps suffered particularly heavy casualties supporting the British offensive during the Battle of Arras. The “Red Baron” Richthofen achieved 49 of his victories flying Albatros scouts, at least two of which were painted all red.

Due to the lower left-wing failures (due to Flutter where the wing joined the fuselage), it was a disappointment that German pilots could not fly the aircraft at full performance, such as with high G-maneuvering or steep fast dives. Von Hippel is noted as one of the few survivors of this occurrence crashing his CO’s Albatros on 18 February 1918.

This flyable aircraft is a faithful reproduction in the livery of Lt J. von Hippel’s Jasta 5 (designated by the red spinner and green tail) known as “Blitz” (designated by the wavy arrow on side of aircraft), an Albatros D.Va 5638/17 flown from Dec. ‘17 until Jan. ‘18.

N4882UT was built in 1978 by Art Williams at Williams Flugzeugbau in Southern Germany  which specialized in highly accurate Great War reproductions with lozenge fabric. It was acquired by the museum in late 2012 and received it airworthiness certificate on 17 May 2016.

The first aircraft shot down by an American pilot in an American squadron was an Albatros  D.Va, flown by Vizefeldwebel (Staff Sargent) Antoni Wronieki, a Polish pilot in the German air service. 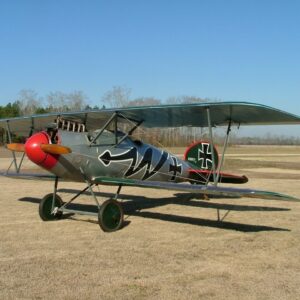 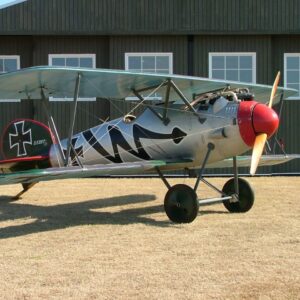