Nearly 3,300 D.VII aircraft were produced in the second half of 1918. It made a “dramatic impact on the air war over the Western Front; German pilots doubled their rate of scoring victories after they started flying it.” DVII’s achieved more victories than all other German aircraft between August 1914 and April 1918.

The metal tubed fuselage and the thick box-spar wing coupled with the 180hp Mercedes a D.IIIaü, and later the over compressed 185hp BMW IIIa V6 in-line engines (125mph) gave German pilots the ability to aggressively climb and maneuver the D.VII to its limits. Due to these factors, its strength influenced subsequence 1920’s American biplane design.

Flown by the top aces such as Ernst Udet, the D.VII eventually equipped 78 Jagdstaffeln.(fighter squadron) when the war ended in November 1918 with 1,069 in service. 142 went to the U.S. Army Air Service due to the Armistice Agreement ordering Germany to turn over 1700 fighter & bomber aircraft including all D.VIIs.

MAM has two flyable, replica aircraft representing the Fokker D.VII. One, N1918F represents Fokker 7795/18 one of five stationed at Langley Field but destroyed in a 6 December 1922 over the field midair collision with a Martin NBS-1. It was built by Fred Berg in 1959, is perhaps the most authentic with its 1918 Hall-Scott (Mercedes copy) engine and factory five-color Fünffarbiger camouflage covering that is imprinted into the fabric, not painted on. The second, N1918P, was built by Byron Peterson in 1991 and represents a late number (6880/18) DVII of Royal Prussian Jasta 33 flown by its CO Lt Carl August von Schoenbeck to the end of the war (8-vic WW2 Major General).

The U.S. Army Air Service’s Advanced Pursuit training squadron Kelly Field Texas was composed mostly of Fokker D.VIIs as late as 1920. A D.VII was the personal aircraft of the Commander of the Western Air District (1919-21) Maj. H.H. Arnold who later commanded the U.S. Army Air Force in WW2. One Hall-Scott powered D.VII (same as ours) was used in the 1929 movie Hell’s Angels.” It carried a movie camera mounted on top of the rear fuselage for over-the-tail shots.

Fokker-built aircraft with the new BMW engine were called D.VII(F), the suffix “F” standing for either Max Friz, the engine designer, or according to most historians an abbreviation for the special Fliegerbenzin fuel they require to operate best, safely, and consistently.

The D.VII had important structural and aerodynamic innovations such as the thick wing built around a box spar with rounded leading edge giving it high lift and great stalling characteristics making it easy to fly and “enabling it to ‘hang on the prop’ without stalling. It continued the DR1’s innovative steel tubular fuselage.

The Polish deployed approximately 50 aircraft during the Polish-Soviet War, using them mainly for ground attack missions. The Hungarian Soviet Republic used a number of D.VIIs, both built by MAG and ex-German aircraft in the Hungarian-Romanian War of 1919. The Dutch, Swiss, and Belgian air forces also operated the D.VII post WW1 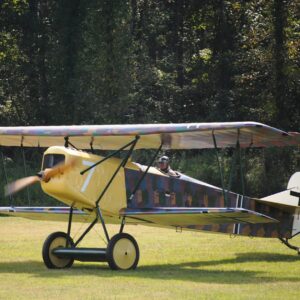 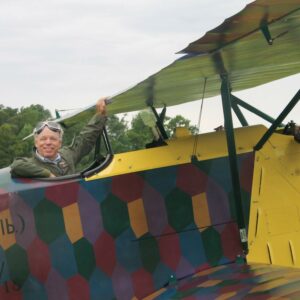