The Eindeckers were designed and constructed as a single seat- single wing reconnaissance aircraft by Fokker. During WW1, aircraft performing this function were called “scouts”. The 3rd version was the E.III, the first production built “true fighter” armed with a single 7.92-mm Spandau LMG 08 machine gun with 500 rounds of ammunition synchronized to fire through the propeller.

It used wing warping instead of ailerons for roll control, and what would become typical of Fokker built aircraft, had a welded steel tube fuselage frame. The approximately 480 E.IIIs were powered by an 87mph Oberursel U.I 9-cylinder rotary engine with a two-blade wooden propeller. It’s forward firing, synchronized machine gun gave the pilots an advantage since they could aim the gun by pointing the aircraft at the target and the belt-fed machine gun could fire an incredible number of rounds into enemy aircraft. German pilots were ordered not to fly it across enemy lines for fear the Allies would capture the secrets of the synchronizing gear.

As the first true “fighter”, Eindeckers in the hands of pilots such as Max Immelmann and Oswald Boelcke were largely responsible for German air dominance from August 1915 until early 1916. The Allies were denied the ability to freely observe and bomb targets, incurring a record loss of aircraft. This period was labeled by the British press as the “Fokker Scourge.” The Eindeckers’ impact was limited by the air tactics of that period. The few aircraft available were spread across several squadrons to directly support each individual squadron’s missions. Thus, the Allies would encounter Eindeckers individually or in small numbers. In order to complete observation missions against Eindecker opposition, the Allies increased the number aircraft assigned to each mission. The critical observation information would be obtained, despite losses. The Allies eventually countered the Eindeckers with the more maneuverable forward MG firing Sopthwith 1 ½ Strutters and the French Nieuport 11 and 17s which ended the “Scourge.”

MAM’s not a full scale (7/8+) Eindecker replica represents a 1915 Fokker assigned serial number of 419/15. It was built in 2013 by Paul S. Musso and Karl Biegert of Mount Laurel, New Jersey, and believed last flown with a different registration number in October 2014 by Dan White It is powered by a 65-hp Continental flat 4-cylinder engine with metal propellers. It was acquired by MAM in 2015.

The Arco DH.2 fighter also challenged the Eindeckers. Lt. Kurt Wintgens was the first military fighter pilot to score an Eindecker victory over an opposing aircraft, while  piloting a prototype Eindecker E.I armed with a synchronized machine gun. On 1 July 1915, he engaged a Morane-Saulnier Type L “Parasol” two-seater. The French  aircraft was most likely from Escadrille M.S.48.  He was later shot down and killed by French ace Captain Alfred Heurtaux CO of Escadrille N3 the “Storks.” It was Heurtaux’s 8th of 21 victories/16 probables. 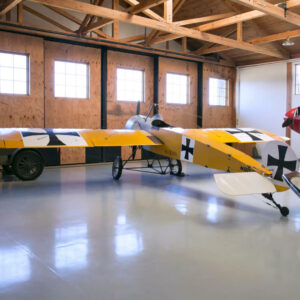 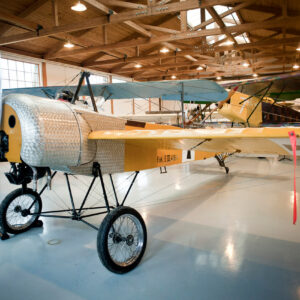