The Museum’s aircraft, known affectionately as Tante Ju, is the only flying example of this aircraft in North America. Tante Ju is a Spanish-built licensed version of the Ju-52 known as the CASA 352.

Although awkward looking and considered by some to have been obsolete at the outbreak of WWII, the Ju-52 would provide the Luftwaffe much needed air-lift capacity. Defined by its corrugated metal skin, which provided strength while reducing overall weight, and Junkers “double wing” which afforded extra lift, the aircraft was originally designed as an airliner. Its rugged design would open up air travel to the Canadian north, to the Eurasian Steppe and even the development of inland air travel in South America, making it among the most important commercial aircraft types in history. However, it would be its service in World War II that would come to define the aircraft’s legacy.

In addition to its role as a cargo and paratrooper transport, the Luftwaffe did make some early use of the Ju 52 as a bomber (with a capacity of 3,300 lbs of bombs), though its slow speed and lack of maneuverability brought this use to a quick end. It would also tow gliders extensively in the early stages of the war when they were used for aerial envelopment attacks on fortified Allied positions.

During the invasion of Poland, Ju 52s would fly more than 2,500 flights carrying 1,600 tons of supplies, and 20,000 troops to forward staging areas. When the attack on Norway unfolded, Ju 52s carried paratroopers to secure airports, bridges and other vital infrastructure.

The Museum’s Ju 52 wears the markings of Kampfgeschwader zur besonderen Verwendung 1, a Ju 52 unit involved in the invasion of Crete. Five hundred Ju 52s would land thousands of troops on Crete, but the well-entrenched defenders would lead to more than 7,000 German casualties, around a quarter of those dropped. It was this disastrous victory that convinced Hitler that airborne operations were no longer viable, a miscalculation that would be made clear in June 1944 with the Allied landings in France.

The Museum’s Ju 52 was originally brought to the United States by Confederate Air Force (now known as the Commemorative Air Force). The group had organized a fundraiser to secure the $16,500 purchase price to acquire the airplane from the Spanish government. The 8,000-mile transatlantic journey was accomplished by CAF members over 10 days in July 1980. Tante Ju joined the Military Aviation Museum collection in 2010.

Hugo Junkers: Junkers was a champion of the monoplane design and believed it to be the future of air travel. He had introduced his first all-metal airliner back in 1919 just months after Germany’s defeat in WWI. The Junkers F-13 was a tremendous leap forward in technology, with its aluminum alloy construction allowing it to operate extensively in environments that were harsh on wood and fabric.

Although the Ju 52 allowed direct flights from Berlin to Stockholm and even allowed an air route to Rome to be opened over the Alps (a flight which took just 10 short hours), it would not mean success for Hugo Junkers who was removed from control of his company in 1934 due to his opposition of the Nazis.

The convex mirrors on the inboard side of both wing engine nacelles were used to synchronize the engines. Once the pilot set his middle engine speed, he would look left and right to adjust the speed of each wing-mounted engine while using the mirror to match his middle engine. 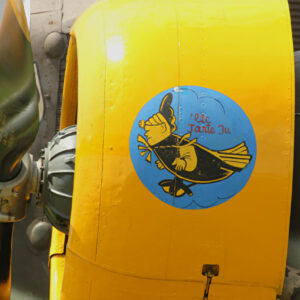 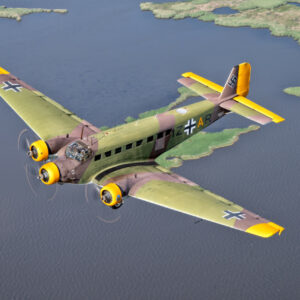 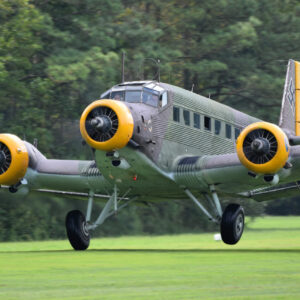 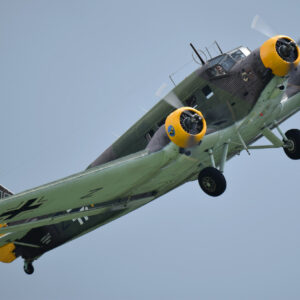 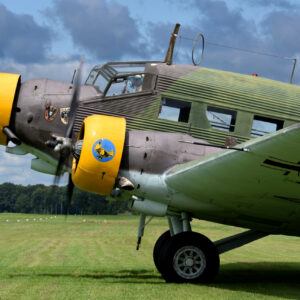