The Nieuport 17 was a larger and a more powerful successor to the Nieuport 11 with its 110hp LeRhone 9J rotary engine (103 mph), continuing the sesquiplane scout layout (bottom wing smaller that the top). The sesquiplane was used to improve downward visibility.  Unfortunately, due to aerodynamic and structural interactions not understood at that time, there was an inherent structural weakness with this configuration.

Initially fitted with a single Lewis gun on a simple mounting above the wing firing over the propeller, most later French aircraft were fitted with a single fuselage mounted synchronized 7.7mm belt fed Vickers Machine gun firing thru the propeller arc. The Vickers gun was not installed on the British Nieuport 17s as they felt it unreliable.  British aircraft were fitted with a single over wing Foster mounted Lewis gun. The Russians, and the American staffed squadron N124 “Lafayette Escadrille” Neiuport 17s generally carried both Vickers and Lewis guns, incurring a performance penalty due the added weight.

It was very maneuverable with quick turns, and out climbed the Eindeckers. Its performance impressed the Germans so much that they manufactured them as the Schuckert D.I. The Nieuport 17s helped French maintain air superiority during the battle of Verdun.

In addition to being flown by the principal French aces, the Nieuport 17 was flown by British aces Albert Ball, “Mick” Mannock, and “Billy” Bishop, Italian Ace Francesco Baracca (carrying his prancing stallion emblem latter presented to Enzo Ferrari by Baracca’s mother) and Russian Ace Alexander Kozakov. They were flown by both sides during the Russian Civil war. Over 4,300 Nieuport 17s were built. They partially equipped every French scout unit at some time during 1916. They were considered obsolescent by July 1917 being eclipsed by the two-gun Albatross scouts. The Nieuport 17s were superseded by the French SPAD.VII and British S.E.5a. and Camel.

MAM’s Nieuport 17 powered by a 4-cycle modern engine was constructed in 2011 by Robert A. Garcia. It was acquired by the museum in 2013. Its livery is of one of the 75 Nieuport 17s purchased by the U.S. Army Air Service as advanced trainers (31st Aero Squadron) at the 3rd Aviation Instruction Center Issoudon near Tours, France (1917/8). They were unarmed, with large training numbers painted on the side of the fuselage but maintained their national marking until the fabric wore out.

The Stork squadron N3 grew into a fighter group during the Battle of Verdun known as Groupes de Combat (GC 12) with N3, N26, N73, & N103, each squadron adopted variation of the common stork emblem.  They received their Nieuport 17s in June 1916.

Albert Ball, a former Nieuport 17 ace was the test pilot for RAF S.E.5 and recommended that one of its guns be an over-the wing Drum fed Lewis machine gun which with the fuselage mounted Vickers were the firepower behind the S.E.5a.

Sesquiplane is essentially 1 ½ wing biplane, the smaller lower wing with a single spar compared to the two spars in the larger upper wing.  In sustained high-speed dives, the plane had a nasty habit of ridding itself of the lower wing, and later models were strengthened in that area. 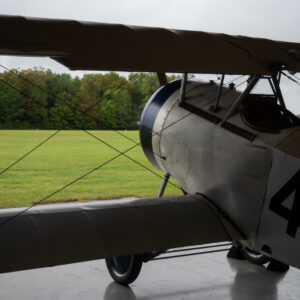 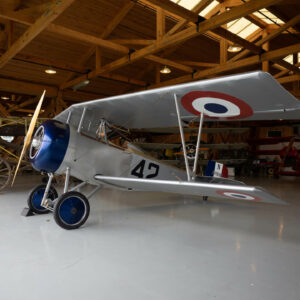 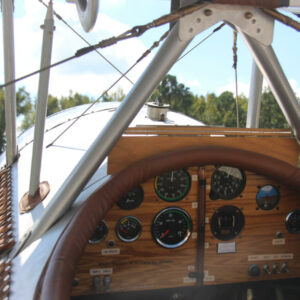 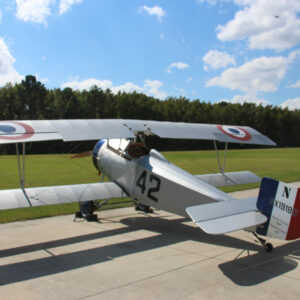 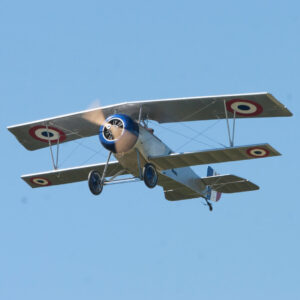