The S-4C Scout, although unsuitable for combat service, was successfully employed as an advanced trainer. Its one gun and 100 mph speed were outclassed by the two gun, 130-mph fighters of 1917-18 making it unacceptable as a frontline fighter. Since the United States had no obsolete pursuit aircraft of its own to use as advanced trainers, it had to build advanced trainers from scratch. The match was the trim little “Tommy” powered by the 80hp Le Rhône C-9 Rotary with the Marlin .30-caliber machine gun firing through the propeller using the Constantinescu synchronizing gear, the basic synchronizing gear used through the late 1930s.

The Ithaca, NY based Thomas-Morse company produced approximately 447 SC-4Cs. Designed by Englishman Douglas Thomas who also helped with the JN-4 Jenny, the first flight was June 1917 in Hampton, Va., at the Army Experimentation Air Station (now Langley Field). The S-4eC was considered “pleasant to fly, sensitive on the controls and exhibiting the gyroscopic effect of all rotary-powered aircraft.”

Our S-4C “Tommy” N38663, (plate# 481) was accepted by the U.S. Army Air Corps (USAAC) in July 1918 and has been rebuilt using original parts and an 80-hp Le Rhone 9-C, 9-cylinder rotary engine. It is thought to have served at Rockwell Field in California. After the war, it was apparently sold as surplus, yet remained in California.

Forgiving of pilot error and looking like a 1918 frontline fighter, it became the most widely known Great War U.S. built single-seat scout aircraft due to its incredible movie career. Surplus ‘Tommys’ appeared in Hell’s Angels, Dawn Patrol, The Sky  Raider, Lafayette Escadrille, Suzy & The Aviator; however, MAM has no records to indicate our aircraft was used in this way and this role is being researched. The “Tommy” has survived in large numbers.

The “Tommy” also was used as an “aggressor fighter” painted in German markings in many of the training schools.

It was the first gate guard at Langley Field.

The Navy and Marines flew a few Tommies and even mounted some of them with floats and launched them from catapults. 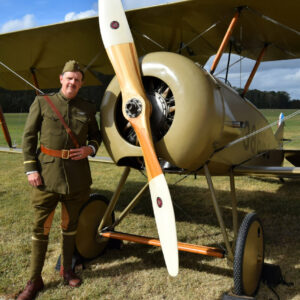 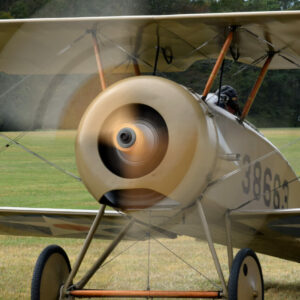 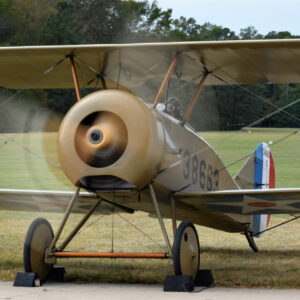 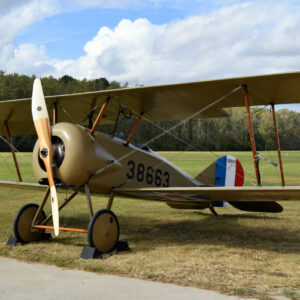